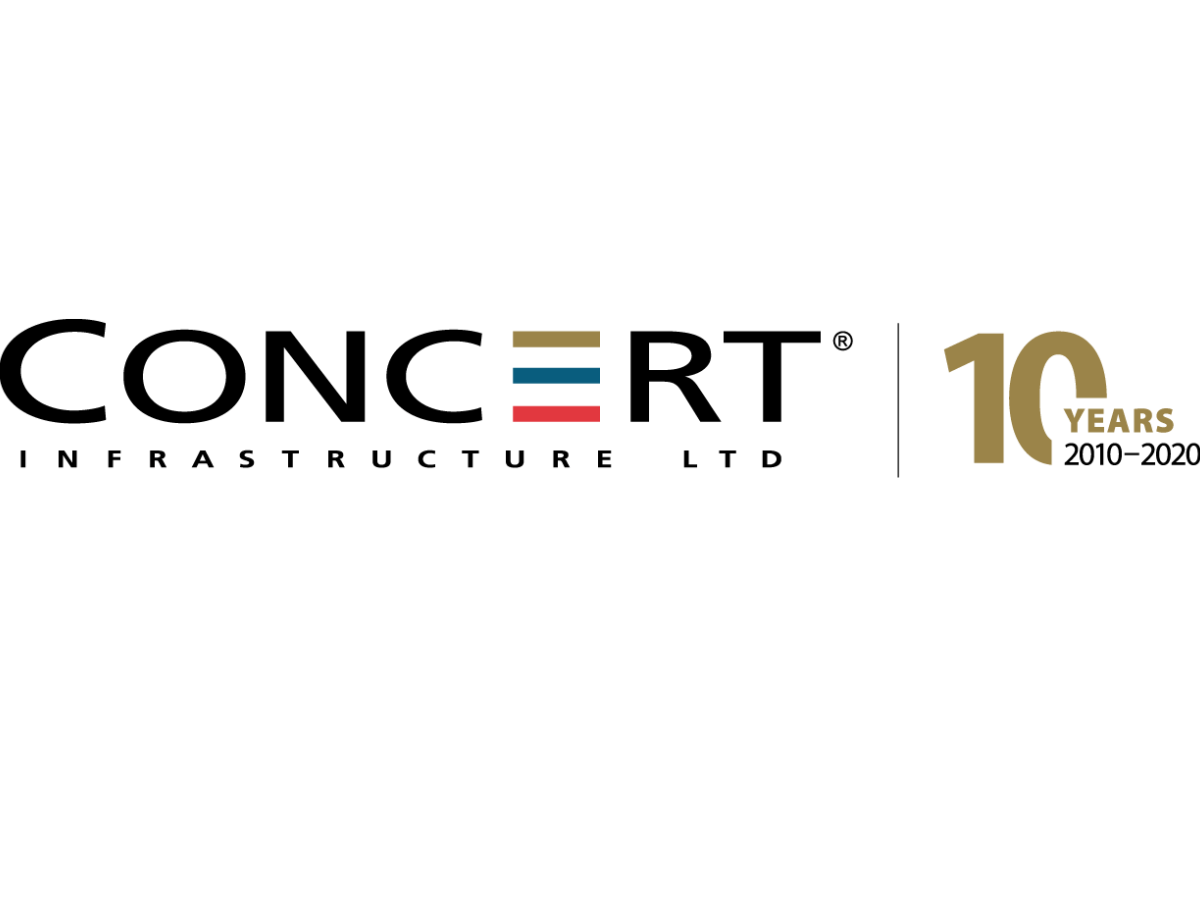 Since its 2010 formation, Concert Infrastructure Fund has expanded to become the largest multi-site investor and manager of public-private partnership (‘P3’) infrastructure in North America.  Its investment portfolio has an aggregate value of approximately $2.5 billion, with projects located in four provinces and one territory.

To mark the company’s milestone tenth anniversary (in October of this year), a commemorative logo will be used to help celebrate Concert Infrastructure’s achievements in building critical social and economic infrastructure projects over the past decade.

From day one, Concert Infrastructure has been backed by the strength and commitment of 10 Canadian union and management pension plans, with the primary mandate to secure solid investment opportunities for its pension plan unit holders - Canadian infrastructure built with Canadian dollars, with returns supporting Canadian pensions.

Created alongside Concert Properties through an enthusiastically-subscribed rights offering to existing shareholders, Concert Infrastructure began to establish itself in the sector and build a reputation through its shared values with Concert Properties, a company that built its reputation on values of integrity, service and quality.

Concert Infrastructure began with joint-venture partnerships in order to learn from established companies in the sector like Hochtieff PPP Solutions (Ontario Provincial Police Modernization Project) and Carillion PLC (Forensic Services Coroner’s Complex Project) and eventually built internal experience and a strong reputation all its own – in a sector where the primary competition generally had a five-year head start.

“We came later to the P3 infrastructure game but managed to establish ourselves and today actually have the third largest social infrastructure portfolio in Canada,” says Derron Bain, Concert Infrastructure Managing Director. “Success fundamentally comes down to the values and approach of the overall company and the team. And we were able to be directly engaged in working with our construction and facility management partners; we roll up our sleeves and support meeting project objectives through this strategy.”

As a hands-on partner and direct drive manager of infrastructure, Concert Infrastructure has been willing to leverage and apply its development, construction and operational experience to the benefit of its partners and the projects it has invested in, which has been an ongoing differentiator in its relationship with government partners and positioning for future project and investment success.

In 2017, Concert Infrastructure secured the Bruce Power Office Complex and Training Facility project delivering it through a modified design, build, finance and maintain model over a 26.5 year term. This became the first P3 project to use Concert Realty Service as the facility management service provider, an innovative approach and solution to better meet client needs.

“This partnership provides a holistic, all-in-one solution that includes facility and various sub-contract management,” says Liza Bauer, Director, Property Management with Concert Realty. “Our client, Bruce Power, has been very pleased with the delivery to date, which is evidence that Concert’s P3 approach provides a positive customer experience.”

In April 2019, Concert Infrastructure acquired a majority interest in Arctic Infrastructure Limited Partnership, the company responsible for the improvement, operation and maintenance of the Iqaluit International Airport in Nunavut.

“This airport infrastructure is the lifeline for the Nunavut territory,” says Bain. “There’s only a small window every year to get supplies into that community via sea. It’s critical that this infrastructure  operates well and meets the community need throughout the year.”

This social, community-oriented focus and philosophy lies at the heart of so many projects Concert Infrastructure works on. This is where the strength and alignment of the team is paramount. The exceptional team has grown in size, quality and experience over the years. Another Concert Infrastructure differentiator is that many on the team bring government infrastructure project experience, providing immediate credibility with clients, as well as a built-in understanding of client needs.

“We’re primarily focused on critical social infrastructure and continuing to follow the path we’ve blazed,” says Bain. “Committed to our founding principles and objectives, we are cautiously considering new opportunities across the infrastructure sector to grow our portfolio, strengthen the social fabric of Canadian communities and provide positive financial return to our unit holders.”