Concert to launch 50-storey condo at Heart of Burquitlam 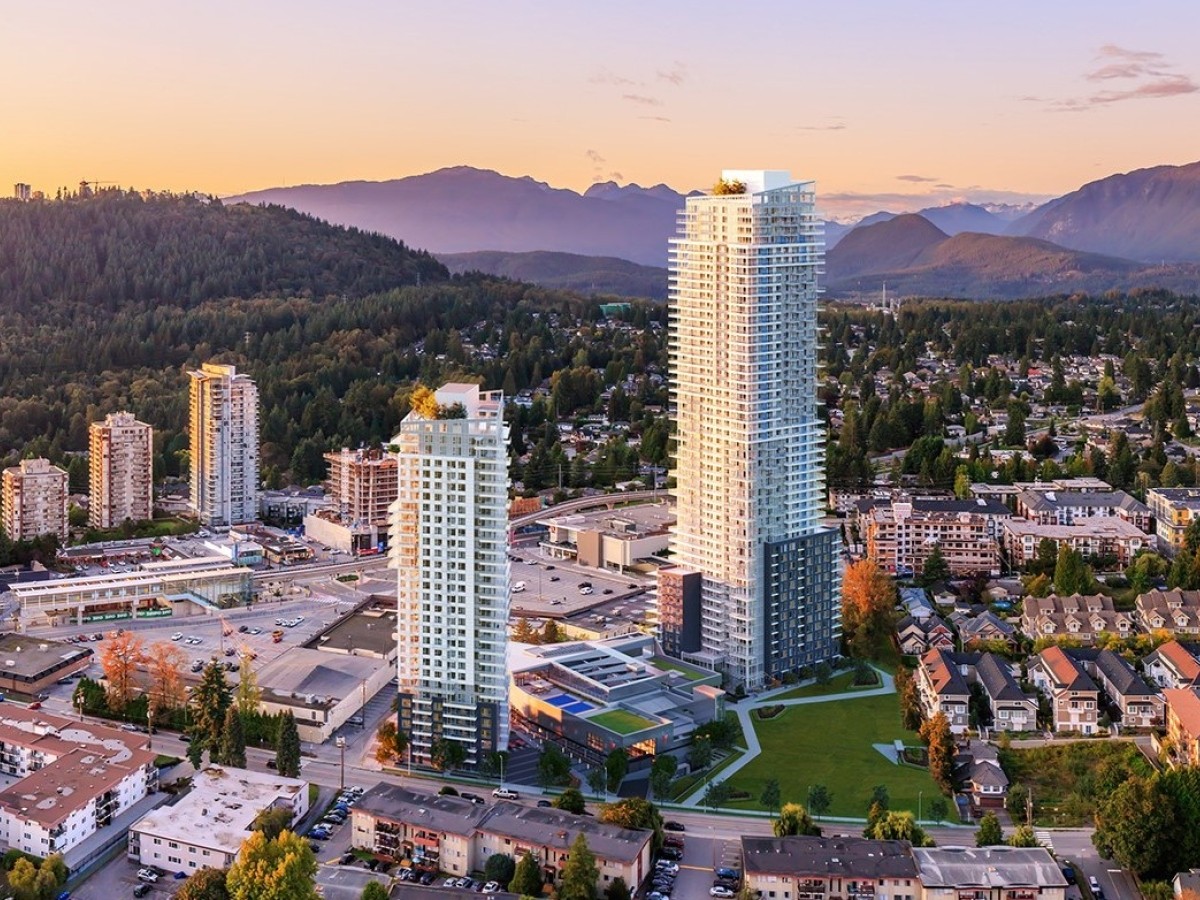 The final phase of Concert Properties‘ master-planned, two-tower Heart of Burquitlam housing and community centre development involving the YMCA of Greater Vancouver and the City of Coquitlam is about to launch.

Concert has announced it will begin sales this fall for its 50-storey Myriad condominium tower. The high-rise will be the final phase of the project, which also includes a 31-storey rental tower which Concert trumpets as the city’s most energy-efficient multifamily property, as well as a 55,000-square-foot YMCA community centre.

“It’s only through years of thoughtful planning and investments by all three partners that we’re able to deliver such a wealth of community amenities that include affordable, assured homes exceeding sustainability standards, for a wide diversity of residents,” said Brian McCauley, president and CEO of Concert, in the announcement. “This is our ninth master-planned community built, or in development, across Canada.”

The Heart of Burquitlam development is being constructed adjacent to a large park and just steps from the Burquitlam SkyTrain station on Greater Vancouver’s Evergreen transit line. The two residential towers will bracket the YMCA, which sits at the centre of the property.

The YMCA community centre will include a pool and gymnasium as well as many other spaces and programs. The site will also include a transit park-and-ride facility and a community policing centre.

The Myriad condo tower will contain 468 one-, two-, and three-bedroom suites and more than 20,000 square feet of indoor and outdoor amenity space for residents. The amenities will be spread over three storeys, including the entire top floor.

This will include a large social lounge, chef’s kitchen and dining area, a rooftop terrace with a BBQ and an outdoor children’s play area. Concert says residents will be provided “stunning 50th-floor views in every direction.”

A publicly accessible plaza and a new city park are also part of the plan.

The rental tower, which is already under construction at 551 Emerson St,, is being financed through a recently announced low-cost, $109-million loan provided under the federal government’s Rental Construction Financing Initiative (RCFi). The initiative supports the construction of rental housing across Canada for middle-class families in expensive housing markets.

The 308-unit tower is also being developed by Concert. It will include 100 units which will be acquired by 43 Housing Society as affordable rentals for low- to moderate-income households for a minimum of 60 years. B.C. Housing’s Community Housing Fund is contributing $10.6 million to that initiative, with the City of Coquitlam offering a $3.85 million grant.

B.C. Housing will provide the annual operating funding for those units.

Thirty-one of the apartments will be designated as accessible homes, with two considered “adaptable homes.”

“Continuing our over-30-year history of delivering and managing rental housing in the Lower Mainland, we’re very pleased to partner with all three levels of government and 43 Housing Society to deliver affordable rental homes in the heart of this inclusive, sustainable new master-planned community in Coquitlam,” McCauley said in the release.

“This project is an example of the fabulous outcomes we can achieve when all levels of government, the charitable sector and for-profit businesses work together to address the current housing crisis,” said Claire MacLean, CEO, SHARE Family & Community Services Society/43 Housing Society, in the release. “This project will make a massive difference in the lives of so many, and 43 Housing Society is looking forward to welcoming our newest residents’ home.”

The tower will be built to Step 3 of the B.C. Energy Step Code, making it the most energy-efficient residential tower in the city, the partners say. It is expected to complete in 2023.

With Coquitlam’s vacancy rate at just 2.2 per cent, the tower will provide badly needed rental options for the region.

Concert’s other master-planned communities, either completed or under development, are in the Vancouver, Victoria and Toronto markets.

Concert is currently also selling units at North Harbour, a 12-acre mixed-use development in North Vancouver. That master-planned site will include up to 17 mid-rise buildings along the city’s shoreline.

Its projects will have delivered the largest single injection of rental housing into Greater Vancouver once the Burquitlam Park and nearby Cottonwood master-plan communities are completed.

Since 1989, Concert has amassed over $7 billion in assets, backed and owned by over 200,000 Canadians, represented by union and management pension plans.

Concert has delivered nearly 12,000 rental, condominium and seniors’ homes across Canada and manages over 5,000 rental homes through its property management team.